Yoga on Yamhill in Portland Oregon: Donation Only Center 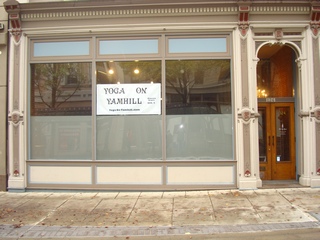 Paul, known to his friends as PJ, is an Army veteran who served in Desert Storm as a youngster. After earning a Bronze Star for his service in Iraq, PJ came back home and began his journey toward yoga. In 2001, he and a good friend gave Bryan Kest’s Power Yoga studio in Santa Monica, California a whirl. He walked into the studio with shorts and a t-shirt — no yoga mat, no water, no expectations.

Inside Yoga on Yamhill

Not knowing what he was in for, or that his introduction to yoga would lead him to building his life around the practice, PJ dove into his first class following the instruction of Kest, moving from pose to pose with sweat pouring from his body. After class, he sat on his rented mat in a delicious daze — thankful for his first yoga experience. 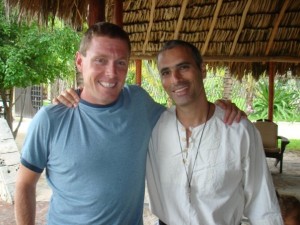 Paul on Left with Bryan Kest

Fast forward to 2010 — PJ has entered into his calling as a yoga instructor. Following the lead of Kest, from whom he gained his yoga certification in 2009, he has chosen to follow the Donation Only model so that yoga can be available to all people, regardless of their financial situations. While there are no set fees for classes, it is important for the practitioner to know that their donations will keep the lights on and provide food for its instructors. The concept surrounds the act of  intentional giving which fuels a healthy and rich yoga community.

Classes are available Monday-Sunday and offer a variety of yoga styles and levels. For more information and Yoga on Yamhill’s schedule, visit www.yogaonyamhill.com. Suggested donations are between $8 & $12.

Energy by James Allen: From Eight Pillars to Prosperity

WATCH: What Really Matters at the End of...

Hi, my name is Ronaldo Pluma, I’m a musician/composer in Montreal, and I’m writing you to let you know that my new album “The Sonic of Zen” is now available on iTunes music.

I created “The Sonic of Zen” for the purpose of leading the listeners into a state of deep, and profound relaxation. I’m very interested in the science of psycho-acoustics, as sound is actually 1 of the most powerful forces in the universe.

What I’ve found from feedback I’ve received is that each of the four long tracks lend this material as a perfect enhancement for yoga, or meditation.

I can truthfully say that I know you, and your students will be thoroughly delighted at how these environmental sound sculptures will contribute a new and enchanting dimension to the yoga experience.

I ask for your support in providing me with the empowerment to continue with this work. I hope you enjoy hearing this album as much as I did making it.