The Prince and the Monster – A Fable about Truth

Once there was a prince who was skillful in the use of the five weapons. One day he was returning home from his practice and met a 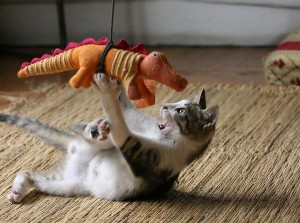 monster whose skin was invulnerable.

The monster started for him but nothing daunted the prince. He shot an arrow at him which fell harmless. Then he threw his spear which failed to penetrate the thick skin. Then he threw a bar and a javelin but they failed to hurt the monster. Then he used his sword but the sword broke. The prince attacked the monster with his fists and feet but to no purpose, for the monster clutched him in his giant arms and held him fast. Then the prince tried to use his head as a weapon but in vain.

The monster said, “It is useless for you to resist; I am going to devour you.” But the prince answered, “You may think that I have used all my weapons and am helpless, but I still have one weapon left. If you devour me, I will destroy you from the inside of your stomach.”

The courage of the prince disturbed the monster and he asked, “How can you do that?” The prince replied, “By the power of the Truth.”

Then the monster released him and begged for his instruction in the Truth.

The teaching of this fable is to encourage disciples to persevere in their efforts and to be undaunted in the face of many set backs.

On Drama and Unrelenting Passion

I like this story. Especially since the prince is most surely lying about his certainty about destroying the monster from within. We don’t really ever know if he is bluffing. Also notable, is that the prince’s destiny may be to teach the lesson of Truth and only by being nearly destroyed does he learn of his mission. There is another tale of Truth & Beauty that feels reminiscent of this story for me.