After studying some of the world’s boldest men, women and children, it has become more and more obvious to me that 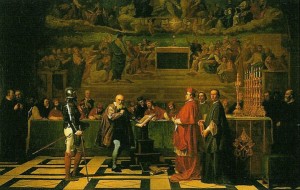 Galileo in Court - Sharing HIs Truth

they seem to share five traits. I’ll be sharing them at the TED Conference in Irvine today via video. In an effort to give you a sneak peak, I’ll provide you the first of the five that I”ll be sharing:

1. They listen to the truth within. Plato instructed humanity to “know thyself.” He discovered that when we fail to examine our selves, it is rather impossible to have a purpose in this world.

A couple examples include:

Galileo – He just couldn’t resist standing up and shouting to the world that the earth rotates around the sun…because it was the truth! The government and church taught the opposite and were worried that if the world learned the truth there would be a revolution. They tried to silence Galileo, yet he didn’t quit. They took him to court…he still didn’t quit. They then sentenced him to house arrest until his death. He chose to put his life on the line for future generations. His perseverance was driven by truth…and oodles of gumption…you gotta love it!

Rosa Parks – She stood up for her truth…that she was just as valuable as a white person. In defiance of a ridiculous law, she refused to sit at the back of the bus with the other black men and women. Her actions played a major role in changing history forever!

Those who fail to know their truths…or are just too fearful to acknowledge them tend to be quite unfocused, unhappy, frustrated, frustrating, and dreamless.

I can’t help but wonder if this is why so many of us are miserable and depressed in this world. So many of us fail to really look inside, buck the system, and do our part in changing/improving the world.

If you find yourself doubting yourself…how about taking a bit of time to get to know who you really are.  Ask yourself…”if I could do anything in this world…what would I do?” And then think hard…what within inspires you to desire your dream? Such knowledge is a perfect starting point!

I’ll be a part of the Ted Conference today…check it out from 11-4…the live stream will be at http://www.livestream.com/tedxyouthbommercanyon.

Thank you for reading!