Home Bold Grieving What’s Surrender All About? What I Learned from My Mentor, on the Camino & What I’m Learning Now
Bold GrievingDaily Cup of BoldnessHealthy Mind & BodyIdeas for Being Bolder

What’s Surrender All About? What I Learned from My Mentor, on the Camino & What I’m Learning Now

I first met him in a bookstore. He was tall, lanky, and in his early 60s — his eyes turned bright as we bantered about books.

“You should really check this one out,” he said.

I thanked him and put it back on the shelf — not ready to take the dive into his recommendation.

Little did I know in that moment that Rob would become my writing mentor — a sort of guru. It would take weeks for that to come about.

There was something familiar about him – a sort of soul recognition. Maybe I had met him before?

As the days went by, I didn’t think much about our meeting. Weeks later, I went to a nearby cafe for some breakfast and there he sat reading a book and writing in a journal. We spoke for a few minutes and decided we needed to have breakfast the following Thursday.

Our first Thursday breakfast meeting was so insightful that we decided to make Thursday morning meetings our ritual. This lasted for two years — and I am certain the universe had made it so.

Over and over again he’d talk about surrendering to the here and now. Believing that the universe knows your order. He led me to a book by Michael A. Singer entitled The Surrender Experiment. It’s about a man who decided to say “yes” to what the universe threw his way. This led him to move, to change his life’s focus, to learn to meditate, to buy a piece of property that eventually became a haven for those seeking to deepen their meditation practice, and so much more.

I couldn’t put the book down. My life had become so strange and there were so many things I had no power over — the end of my relationship, my mom’s sickness, my Mom’s death, and trying to keep my head above water in life and matters of the heart.

I wanted nothing more than to surrender – to be happy with the results – knowing that the universe had my back.

“Am I better off making up an alternate reality in my mind and then righting with reality to make it be my way,” writes Singer. “Or am I better letting go of what I want and serving the same forces of reality that managed to create the entire perfection of the universe around me?”

This question hit me quite hard.

I so wanted to surrender and let things unfold. To believe that everything was happening for a reason. It became clearer and clearer that I had far less control than I had ever wished to believe – that failing to surrender could break me.

And so I tried to surrender. I learned to be thankful for the things that pained my soul more than words could describe. I tried to say yes to new opportunities as they came flooding in.

I know I’m not alone in the battle between trying to control my world and surrender to what is. Each day, we’re all presented with challenges that push us to our limits.

One of the ultimate examples from my life was in May of 2015, four months after my Mom died. For my birthday, I had decided to go with a friend to Spain to walk the Camino. Prior to leaving, I read all about the transformations that people had along the way on the Camino and had a fantasy that I’d have revelations and experiences that would launch me into a new, inspired life.

When I hit the ground in Spain, I felt as though I were starting over — that the future was so full of possibility, I could barely contain my enthusiasm. 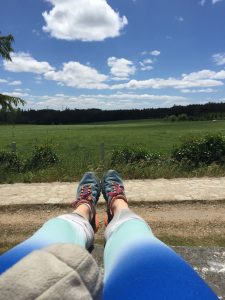 The further we trekked along the trail, the happier and freer I became. During moments of silence, I’d think of my Mom and see her beautiful face in my mind. When we’d stop at the small countryside churches, I’d light a candle for her and thank her for being my best friend and guide. As I’d walk away from each church, I’d think of her light burning brightly within its four walls and my heart would fill and expand.

A few days into our trip, it happened. Life happened in a way I never had expected or wanted.

I got a text from one of my brother’s workers saying he was worried he’d had a stroke. “His face seems to be drooping on one side. He needs to get to a hospital.”

The world spun on its axis.

“Yes, he’s not remembering any of our names. He’s really acting strange.”

All of my new found enthusiasm and charge for life was instantly drained. I sat down on a large boulder and tried to reckon with the fact that I was being forced back into a caretaker role. Without my Mom around and my brother being single, I had no choice. 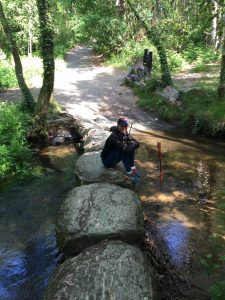 I hiked along in the middle of nowhere, wondering how I was going to pull it together.

I was angry and frustrated. My internal dialogue was tearing me apart on the inside.

My friend would try to get me to smile and laugh, but the knowledge of what waited for me back home made it nearly impossible. Thanks to my cousin and sister, I was able to finish the trip to Santiago.

I tried my best to surrender to what awaited me. It wasn’t the trip I expected, but I attempted to enjoy the beautiful landscapes, the towering trees, the cafes we frequented, the wine we drank and the fresh food we ate after miles of walking, the dogs I fell in love with, and the people I met along the way.

It was as if the universe was giving me the ultimate example of the bittersweetness of life. There will always be painful challenges, but nonetheless there is beauty everywhere.

Upon reentering the US, I went straight to the hospital and it all started over again. The care taking. Decision making for a loved-one, doctors, medications, follow-ups — along with having to spend hour upon hour in the hospital that my Mom fought her cancer battle.

It didn’t end there, and it isn’t over. My brother is now living with me and I’m trying my best to surrender daily.

Through it all, there have been moments of beauty. Moments that make it all worth it. Like the time I was driving with him and a bank of clouds swept over the hills from the ocean.

My brother’s eyes opened wide and he pointed at the scene with wonder. “Look! How beautiful! Isn’t it beautiful?” 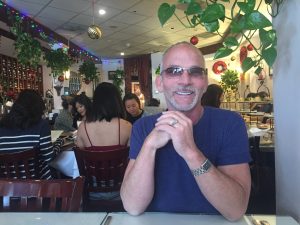 My brother was so often caught up in his work life and busy world before his stroke that a moment like this would probably would never have happened. A simple, yet profound moment shared between brother and sister — and the clouds, how beautiful they were as they floated into view.

This life isn’t easy. But I’m learning more and more that I must surrender. To listen to the universe’s wisdom and to grow as I’m meant to — knowing that it will lead me to where I’m meant to be.

I know everyone faces his or her own challenges. If you’re facing one, I can only suggest that you take in a deep breath, hold it for a second, and exhale with a sense of surrender. Know that it’s going to be okay and look for the simple beauties that surround you.

The human mind is an interesting beast. We hope for the fairytale. We want things to be easy… but it doesn’t always work the way we dream.

Instead we are pushed to our limits, and if we look close enough — we can find the meaning behind it all.

“Everything is perfect, Jen,” my mentor Rob would tell me over and over again during our meetings. “It’s the way it’s supposed to be… where you are here and now.”

Who knew that Rob was preparing me for my ultimate lesson in surrender. Thank goodness he came into my life – to be a guide.

One breath at a time, one second at a time… life will spell itself out and beauty will arrive as it should.

The Lucky Man and the Sea: An Indian Fable That Means Everything About How You See Life

Why the Dying See Their Deceased Relatives Before...

WATCH: What Really Matters at the End of...